In this review article we’ll go over the best party board games for adults – guaranteed for a good time on a night in with friends!

The perfect board game for a party should be entertaining, rather than something to just fill the time. A party is supposed to bring people together for a good time; laughs and jokes are the order of the day. If all you have to offer is Scrabble and cheap wine, then there’s no hope for you, I’m afraid. Everybody’s idea of a good time is obviously not going to be the same, but in general when friends get together, a few drinks with something fun to do is going to make for an enjoyable evening.

Nothing too mentally taxing is needed; nor is anything which will set the more competitive guests off at each other’s throats. Fun is the central theme here, and we shouldn’t forget that.

When compiling our list of best party board games, we have searched through hundreds of customer reviews to find out exactly why a game is suitable. We’ve made sure there’s something in there for all personality types.

So, if you’re planning on hosting a get together between friends in the near future, read on to find out what we think are the best party board games for adults. 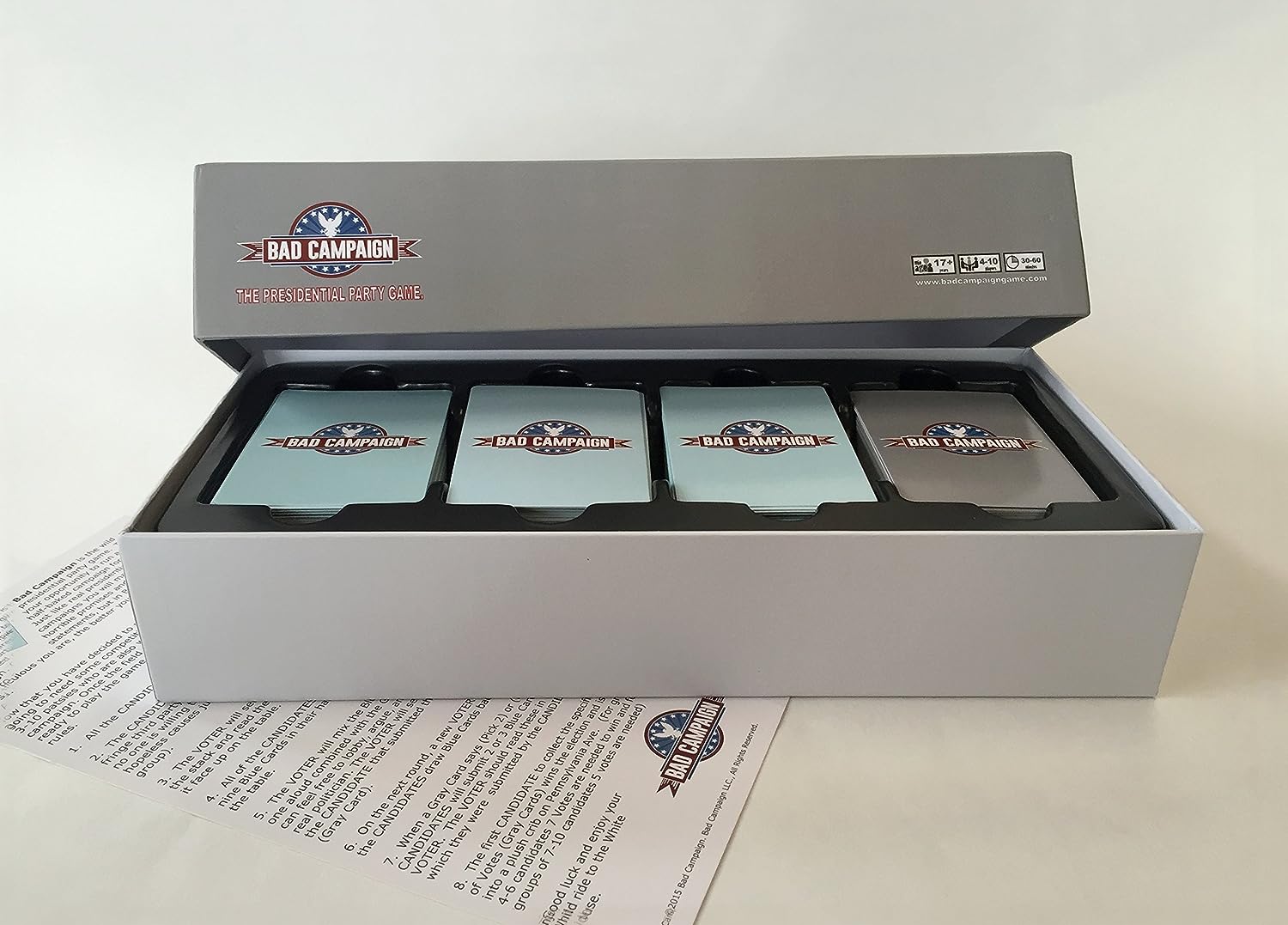 Only weeks after the US election result threw up an unexpected result, you have the opportunity to take part in a half-baked campaign for the Presidency against your friends. Whether or not you supported Clinton or Trump, you could probably do with unwinding a little, as far as politics goes. This game is a great choice for getting everybody laughing together.

You will all take turns at reading out campaign slogans, political promises, and awkward statements. The rest of the players will then submit an answer card to fill in the blank. Each combination is then read out, with the reader voting for their favorite. At the end of the game, the player with the most votes is declared the winner.

Using real life quotes and situations, you will make the usual bad promises which you don’t intend to keep. But the beauty of the game is that the more ridiculous you are, the better your chance of winning.

Many hours of fun to be had with this game; the off the wall humor will have you laughing your socks off in no time. 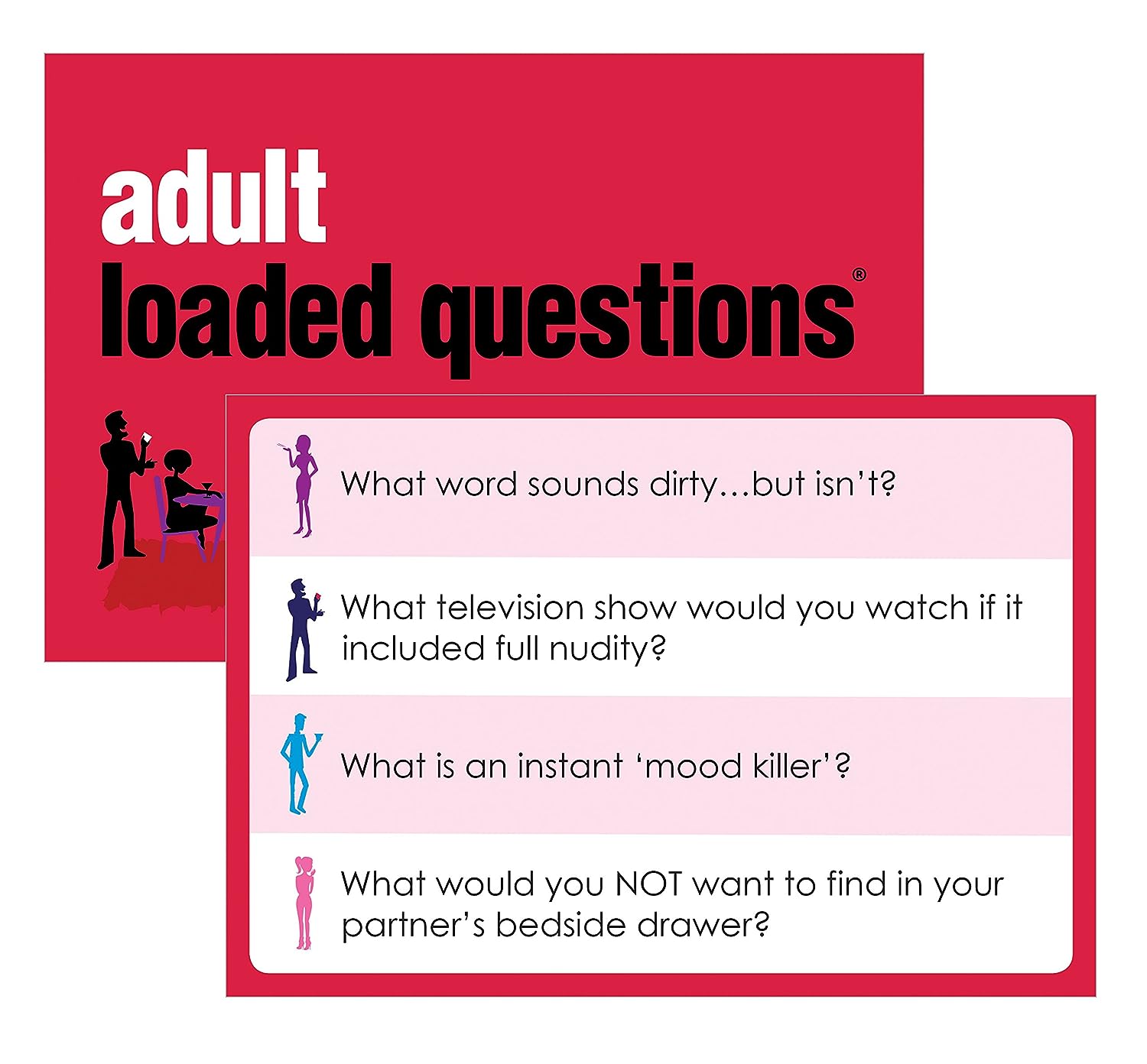 This is a game sure to have everybody in stiches through the evening. Just how well do you know your friends? Now you’re about to find out.

At the start of a player’s turn they roll the dice and read a question for the corresponding color of the square they landed on. The four categories are: Hypotheticals, Anything Goes, No-Brainers, and Personals.

All the other players write their answers down, which are then read out by the previous roller. The current roller will then try to match each answer with the player who wrote it.

There are also squares where the roles are reversed. The roller writes down an answer and the other players must try and guess exactly what they wrote.

With more than 1000 questions this game will keep you all entertained for many sessions. The adult version is a standalone product but can be mixed in with the original for those who like their fun a little more risqué. 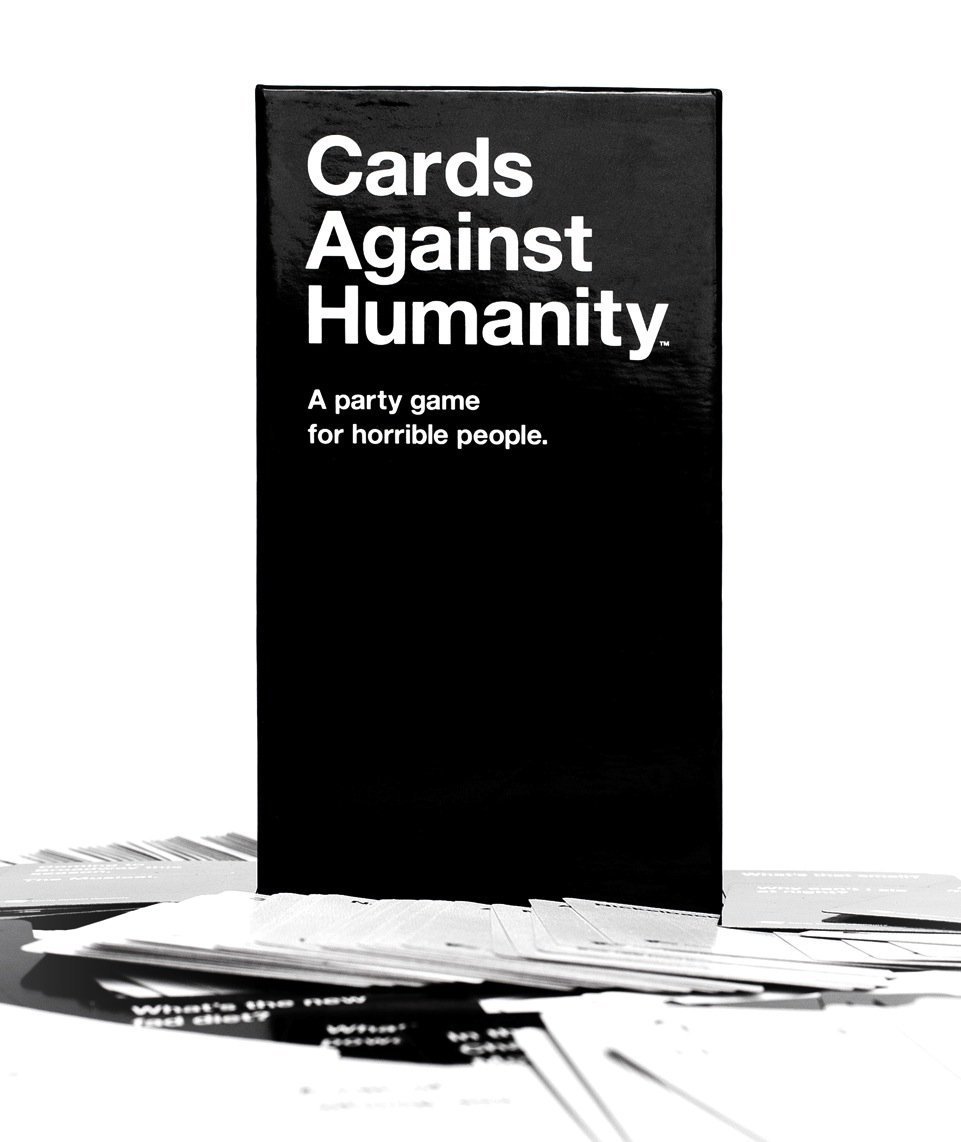 This is the number one best seller in the Amazon Toys & Games department. That alone should tell you just how popular this game is.

Completely politically incorrect, this adult themed card game is a simple way to keep your guests enjoying themselves.

Each player takes a turn reading from a Black Card, and each of the remaining players answer with their funniest White Card.

An example round would be: “Life for the Native Americans was forever changed after the white man introduced them to ____________.”

Answers might include: “Smallpox Blankets”, “Drinking Alone”, “A Can of Whoop-Ass”, and “Take-Backsies”

You do need a little black humor inside you to make the best of this game, but it’s suitable for anybody looking for some laughter. 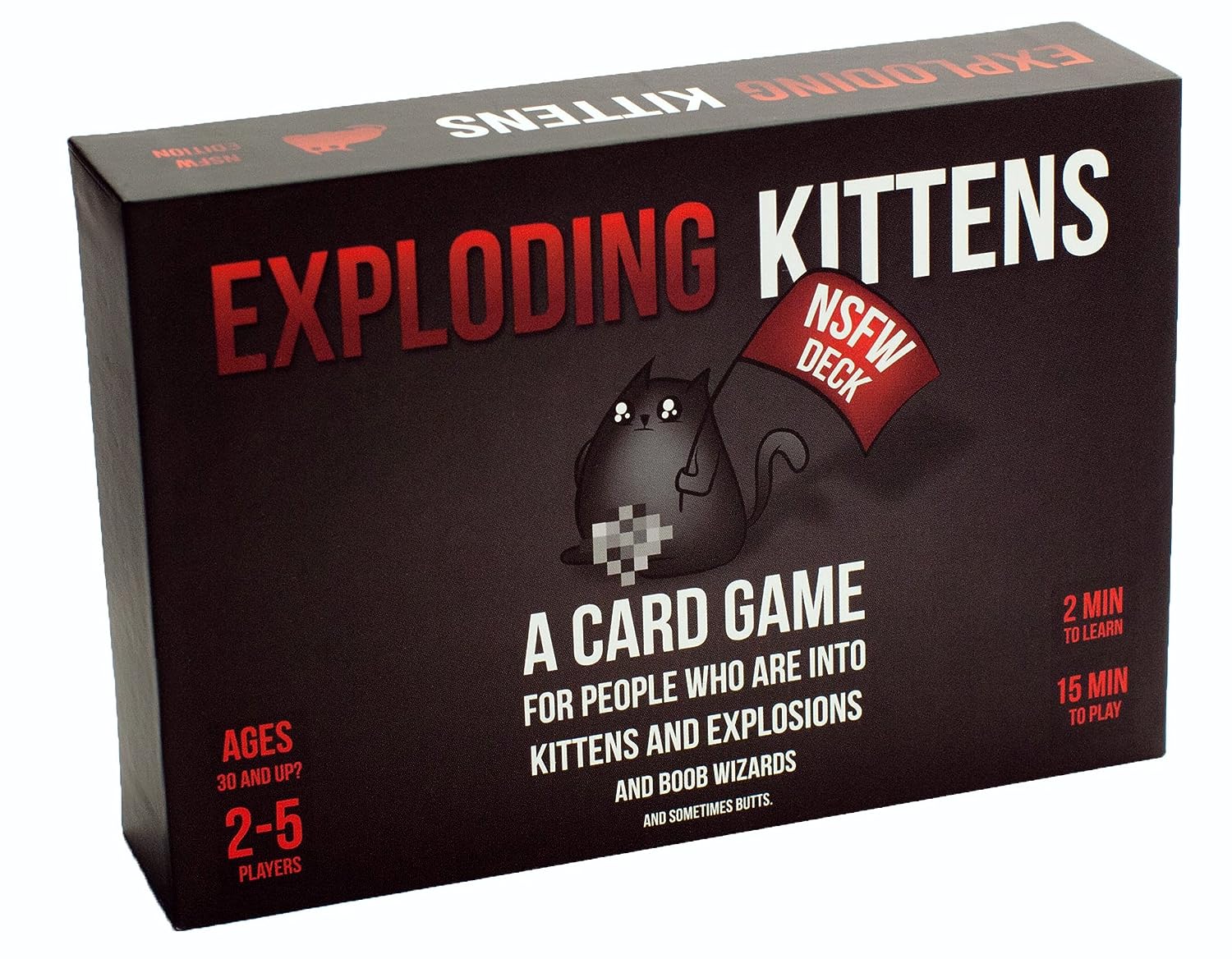 This is a crazy fun and addictive choice. Another Amazon big seller, confirming its popularity.

Exploding Kittens NSFW is an adult remake of the popular card based board game which is super-popular with children. Rehashed with a delightfully crude and obnoxious theme you can expect to have a good time.

The basics of the game play is players draw cards until somebody ends up with the Exploding Kitten card. If whoever drew the bomb isn’t holding a Defuse card, then it’s curtains for the little feline! Other cards involve a variety of actions, but the aim is to be the last man standing. It doesn’t matter how well you’ve done so far, just don’t blow up or it’s game over.

The game contents are magnificently designed, with fantastic artwork of a more adult orientated theme. Expect your guests to have a lot of fun and be laughing all night long. 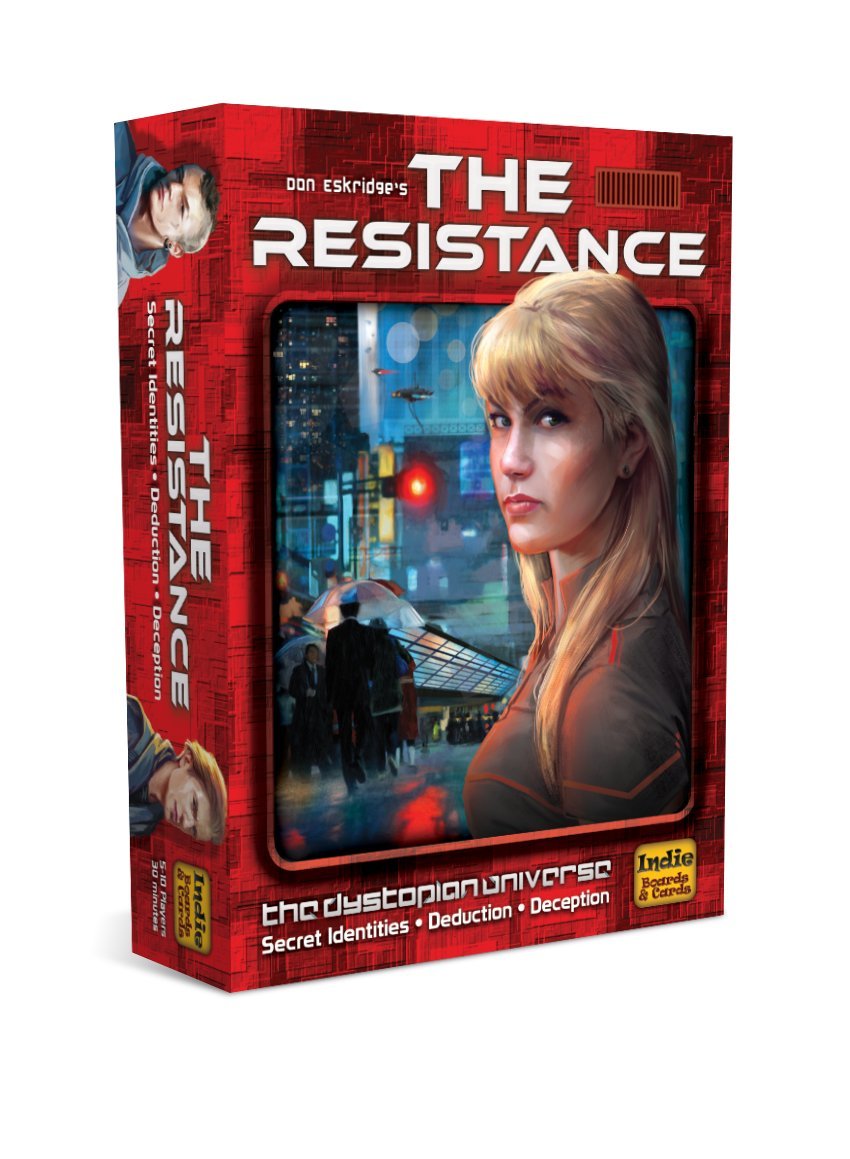 The Resistance is a great game to play with friends. It does come with a health warning though; by the end of your party there’s a chance that some of the guests won’t be on speaking terms any longer.

The aim of the game is for the players to deduce each other’s identities. Set in the middle of a revolution, players take the role of either a resistance member, or a government spy. This is a fairly complex game, but many of you out there I’m sure would prefer something a bit deep to get your teeth into.

5-10 players can play at any one time, and the rules are designed so there is no player elimination; everyone plays until the end. You need to be able to think on your feet while you lie to your friends, and try to work out if they are lying to you.

Don’t expect many laughs from The Resistance, but you will definitely be impressed with how enjoyable the gameplay is.

Smart Ass is a fast-paced trivia game, which unlike Trivial Pursuit, will be over in 30 minutes or less. If you’re the sort of person who loves to shout out the answer to a question, then this will be ideal for you.

The idea is simple; be the first the answer the question. Every turn a question is read out by one player to the remaining players. Each player is allowed a single guess, but there’s a catch. With each question there are 10 clues. So, do you take a chance while you’re not 100% sure, or risk somebody else beating you to the punch by waiting for more clues?

There are 461 question cards divided up into Who, What, and Where am I? categories, which is plenty to prevent repeating too frequently.

A simple but extremely enjoyable way to spend an evening. Something which will test your trivia knowledge, but isn’t mentally taxing. 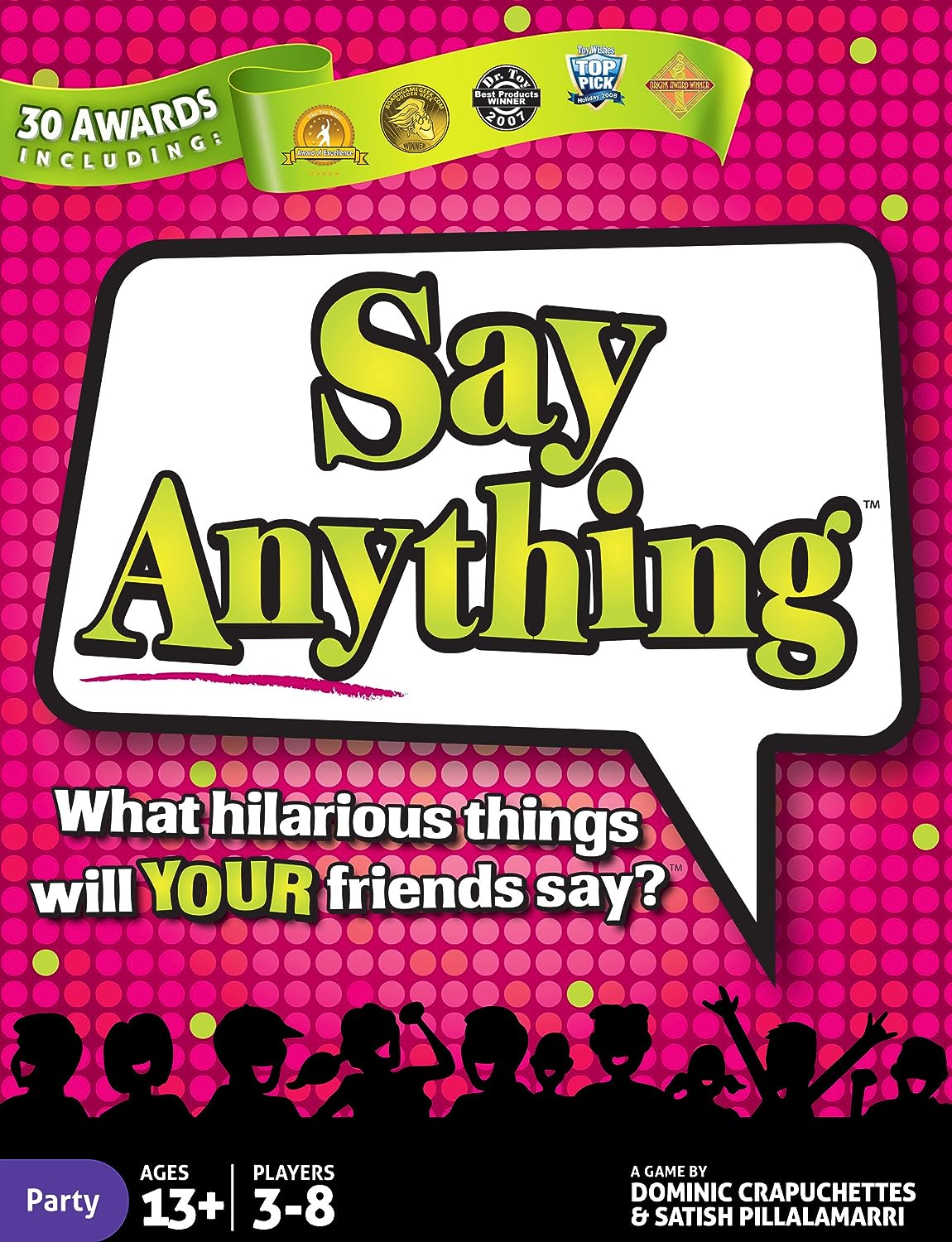 This game has party written all over it. The title means exactly what it says; you can literally say anything. There is no right and wrong here.

The player whose turn it is will ask the other players a question, such as “If you could have a “BIG” anything, what would it be?”

Then the players write down an answer each and turn it face up, so the player whose turn it is can choose his favorite. Players then bet tokens on which answer was chosen as the best.

It’s extremely light-hearted, and just as much a way to get people laughing and talking as it is a game. No deep strategy around here. It’s important to make sure the players are in the right mood to get the best out of Say Anything.  Whoever wins is not important as well, for game such as this, but at only 30 minutes per game if there’s a competitive guest he’ll have plenty of chances over the whole night. 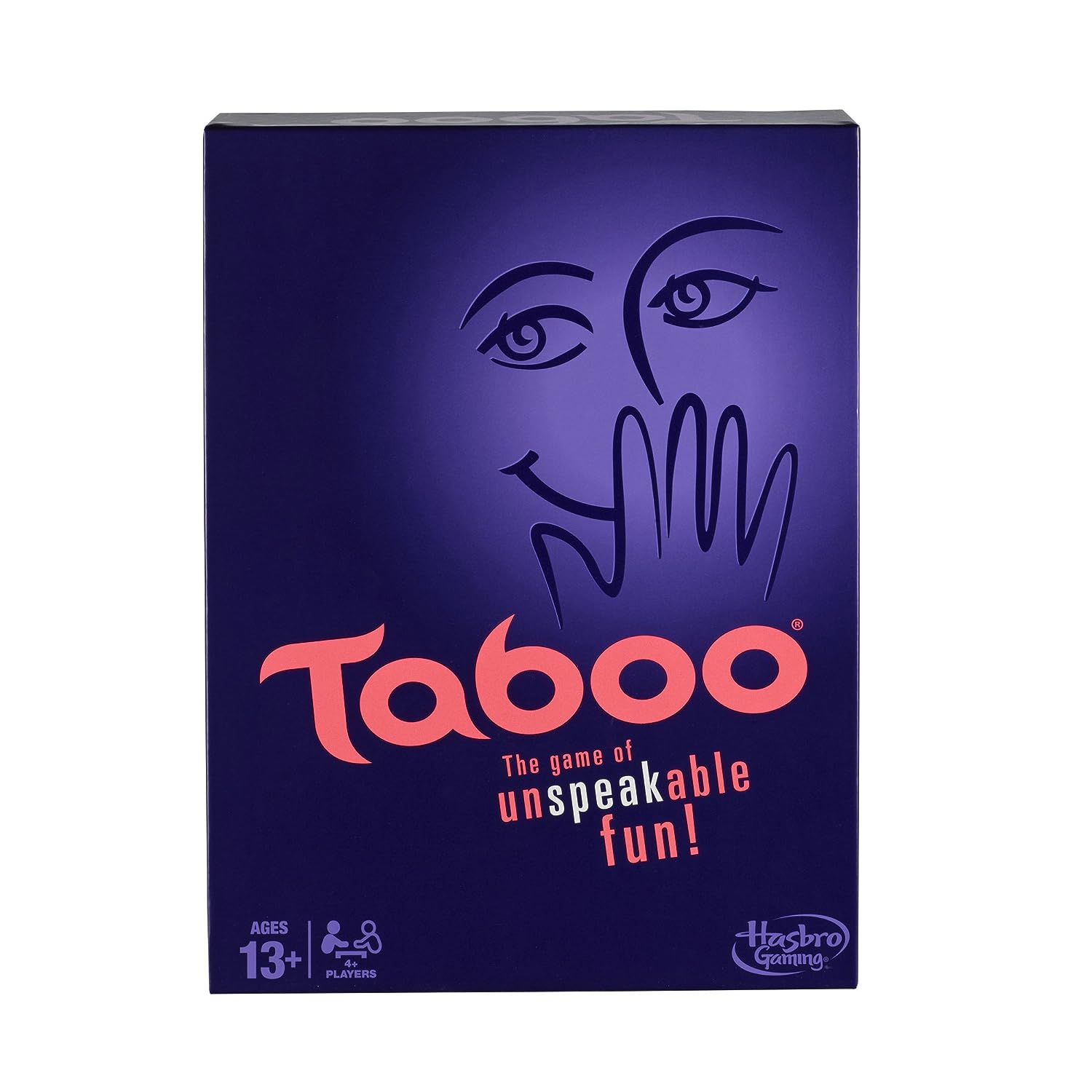 The potential for fun is huge with this game in a party setting. After a few drinks can you come up with a creative clue against the clock? The game has recently been updated to include more relevant topics from pop culture and the latest hot trends, which should make it more interesting.

The best selling point about Taboo is that it is inclusive to most personality types. Anybody in a party mood will get some enjoyment and laughs out of it. In my opinion one of the best party board games for adults – I’d recommend it in if I had to put it to one game. 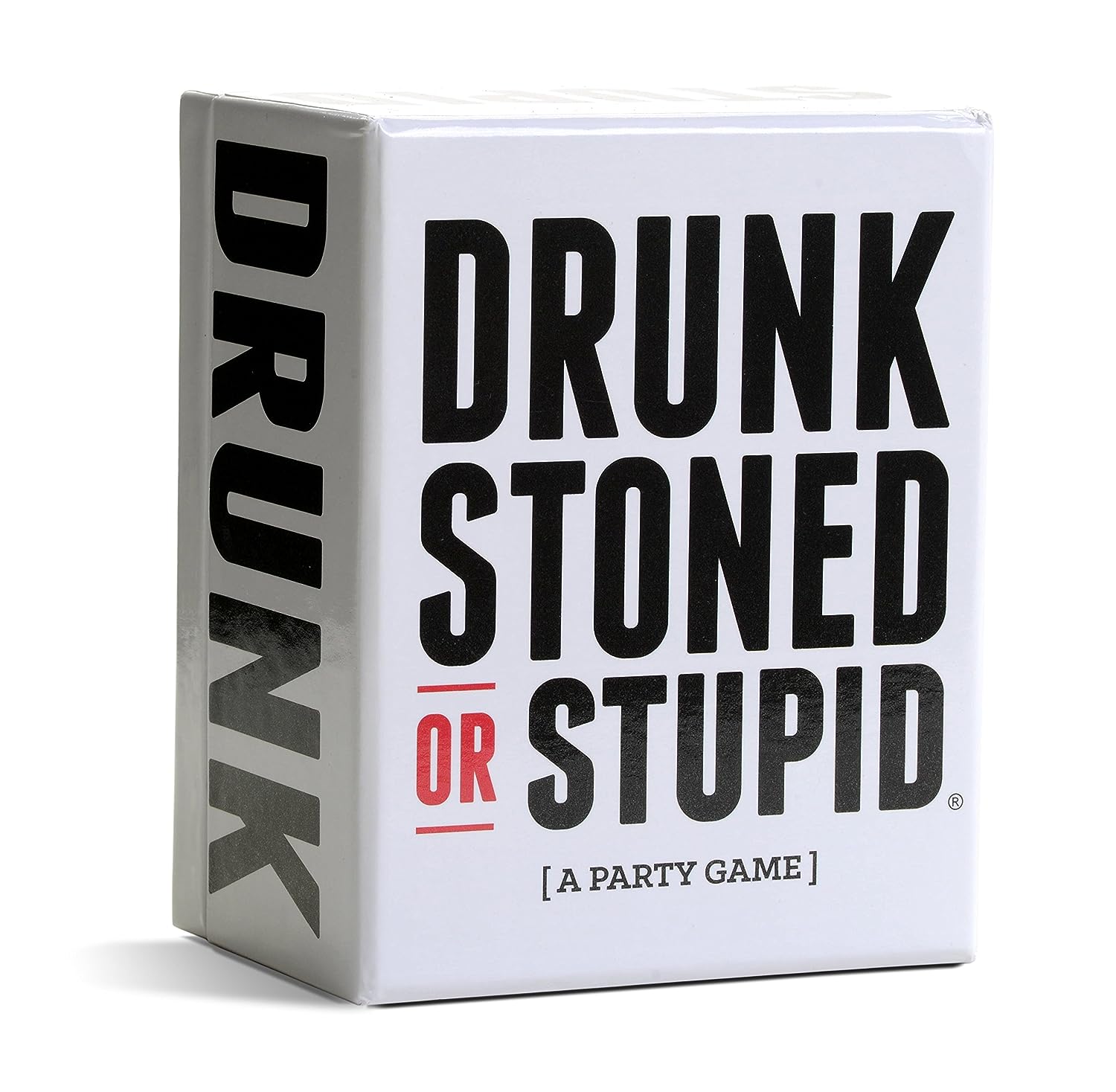 Drunk, Stoned or Stupid is a game which excels in a party environment. It is simply perfect for groups with an off the wall sense of humour. It’s also a great choice for those with a lazy inclination, because the only preparation is shuffling the deck of cards.

The gameplay is turn based with one player acting as the judge, who reads out one of the cards. The remaining players then call out in turn who out of the group should be tagged with this label.

The accusations can be based off of anything you know about this person, it really doesn’t matter. The judge will consider all of what he hears and make a final ruling on who will be tagged. After a single player has been tagged with seven cards he is declared the loser.

This is where the game ends, because there is no winner in Drunk, Stoned, or Stupid; only losers. The game is based around friends poking fun at each other rather than anything competitive. This is all about the laughs, and having a good time.

If members of your group are likely to take offense easily then this might not be the right choice, but for everyone else you can look forward to much hilarity at your party. 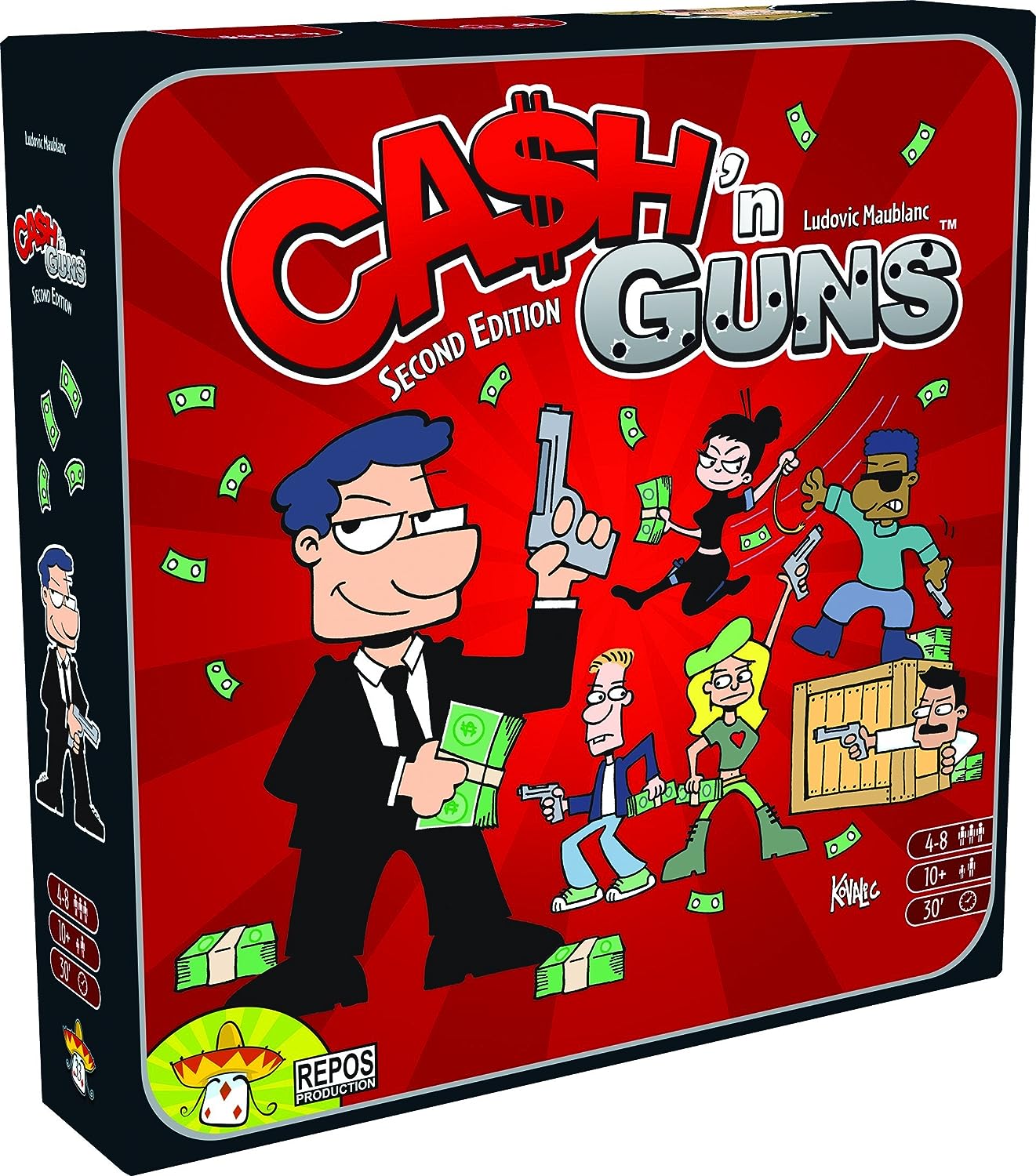 Based around a group of crooks after a successful heist, Cash n Guns is all about what happens when everybody decides that they want a bigger cut of the loot. When bullets speak louder than words it all comes down to who can intimidate their partners the most. With each player issued a full-size foam replica pistol to point at their friends, this is a game that comes with a don’t take it personally warning.

Players have the option each turn to load up with a bullet or a blank card as you try to bluff your way to the biggest share of the loot. Each turn, whoever didn’t get shot or back out gets a share of the loot. This is as interactive as it gets, with that added element of silliness that a few drinks can appreciate.

Some have said that this game doesn’t have enough repetition to be a classic, but the point is that the reviews show it is universally liked by almost all who try it.

It’s difficult to come up with a “best choice” out of a diverse selection of the best party board games for adults, but put on the spot I would recommend Taboo. Anybody who is out for a night of fun will be able to enjoy themselves with this game. For those with a more “extreme” sense of humour it is easy to see which of our top 10 will suit you better.