If you want to know what is the best Pyraminx on the market right now then you probably know what it is, but if not then I’ll do a quick introduction for this fun and exciting twisty puzzle.

The Pyraminx is a tetrahedron puzzle similar to the standard 3×3 Rubik’s cube. It was patented by the same guy who brought you the Megaminx, and Skewb, Uwe Mèffert in 1981.

He first thought of the idea in 1970 and didn’t capitalize on the unique puzzle until 1981 when it entered production in Hong Kong. Uwe credits Erno’s Rubik’s invention for the birth of his Pyraminx. You’re here to find out what the best Pyraminx is, so let’s get into the reviews. Instead of listing every single Pyraminx available I’ve narrowed it down to a few great options that should suit a wide variety of puzzler’s needs. 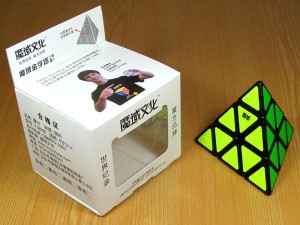 In my opinion, the MoYu Pyraminx is the best overall option out there right now. It’s a top tier speed cube and the price at around $8-10 is more than reasonable, and not that much higher than the budget Shengshou. The MoYu has superior corner cutting, world-record performance, and it’s really smooth to use and solve no matter what your pace. 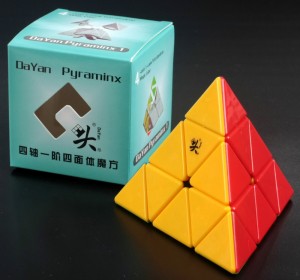 Dayan is a house-hold standard when it comes to speed cubing. A recent survey showed that the Dayan 3×3 was the 2nd most owned cube in the /r/cubers subreddit. I know that this is a Pyraminx and that’s a 3×3 but extrapolating this result makes sense because you know you’re getting the same high-quality construction and usability that Dayan offers. This cube is available in stickerless which I know appeals to a lot of cubers and regular puzzlers, as it does to me as well. This cube is available for around $10 and has an appealing color scheme and stickerless option. The only reason I would get the Dayan Pyraminx over the MoYu is if you’re partial to the brand or like the colors. 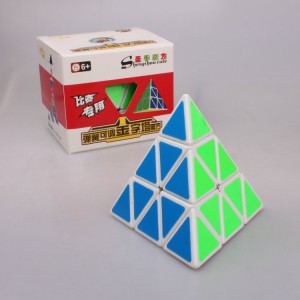 ShengShou does make good quality puzzles, but they’re definitely the budget option as the price dictates. There are ShengShou puzzles being used to set world records so they don’t lack performance but coming in at around $3-5 it’s just a fraction of the cost of other Pyraminx brands. With the same dimensions as the other puzzles, the ShengShou handles well and is very speedy. It has a more clacky feel in comparison to the other options so that may appeal to you. 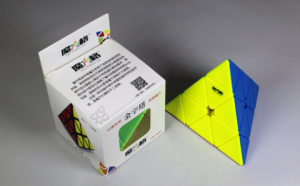 The QiYi is the new kid on the block when it comes to Pyraminx puzzles. This is the most expensive puzzle on the list as it boasts the smoothest turning and best corner cutting with a special bevel on the pieces to allow for superior corner cutting. I still think the MoYu is better because it has great bearings and corner cutting but if you’re really concerned about cutting and popping then go with the QiYi Pyraminx. I’ve also added it to hist list because it has an appealing bright color scheme in comparison to the other puzzles on the list. The price is high, if it wasn’t as high I proabably would’ve given it a slightly higher rating than the MoYu.

How to pick the best Pyraminx for you!

So you’ve read my descriptions and comments on what I think are the four best Pyraminx puzzles on the market, but maybe you’re not sure which one is for you. You could also be buying one as a gift for someone else and require a bit more guidance than has been revealed so far so here we go.

After we get our Pyraminx of course we want to solve it, here are the resources I used to learn algorithms and how to solve my Pyraminx. It’s not a super difficult twisty puzzle if you have some experience, and if not you can definitely figure it out with a bit of time.

We can’t finish off this article without some cool facts on the Pyraminx now can we? 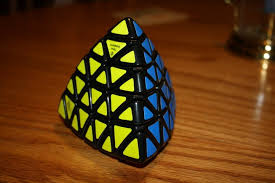 If you got this far, thanks for reading! I put together this list of the best Pyraminx puzzles available because I saw that there was a lack of reviews. Within these four Pyraminx listed here I’m sure you can find the right puzzle for you, from budget to top-tier speed cube options there’s something for everyone.